For Those That Come After Us 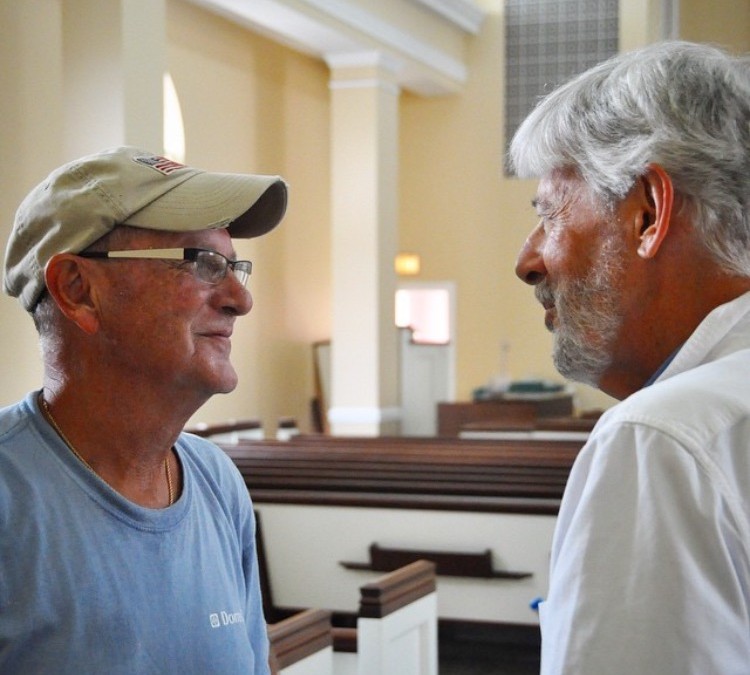 Jenkins on the left and Leib on the right. Photo courtesy of Mark Waltz

Longtime Elkhart Truth columnist and friend to Granger Community Church (GCC), Richard Leib died on March 1, 2016. (read more) Today, I was honored to say a few words at his memorial service and they follow.

I felt I knew Rich Leib before I ever met him. When I opened the Sunday paper, his column in the Elkhart Truth is what I would turn to first. He told stories that were compelling and interesting. He never seemed to flinch from talking about hard things. He wrote even when the social media trolls and the letters to the editor would lambast him for the positions he took. He engaged us in conversation. I was intrigued by Rich but always from a distance, reading his writings.

Then in 2012, a mutual friend, Dave Jenkins introduced us one Sunday morning when the Leib’s attended a church service at GCC-Elkhart and just like that the Leib’s became my friends too.

I don’t recall that I realized at that moment the kind of history that Dave and Rich shared but over the next couple years I would hear stories about the “Lawyers” and their escapades. Over time I came to understand that there was a deep, lifetime brotherhood between my two friends. After Dave passed away last year, I wrote this about a conversation that I got to be a part of in June of 2014. After months of watching Dave grimace as he walked or adjusted the way he sat because of some unusual pain he was experiencing, he called a meeting with his best friend, Richard Leib and myself. One of the things about Dave that was so endearing to me was his ability to get right to the point. He was a truth teller and called it as he saw it. This day was no exception as we sat down in the lobby he told us of his diagnosis of cancer. Although it was difficult for me to hear this, it wasn’t entirely unexpected. As I sat there processing the news, my mind wondered a bit and I felt myself becoming wallpaper as I got a birds eye view of two friends with deep roots into each other’s lives, begin expressing the grief that was sure to follow.

This is how I’ll remember Rich: Loyal, passionate, good humored, loving, a gentleman, deeply committed to Jesus, Lois, his family and friends. I got to sit with him and Lois briefly a couple days before he passed. I don’t know if it helped them but it helped me and I consider it an honor to call them friends.

That’s just part of the story though. Here is the real reason I’m privileged to say a few words today. The Leib’s were longtime members of St. John’s United Church of Christ and in 2006 Rich and some other leaders from St. John’s contacted GCC to explore what it might look like to have a GCC location in Elkhart and GCC could use the St. John’s location. The idea was new and out of the box but neither church was quite ready to move on it, just yet. (read more)

Then 5 years later, in early summer of 2011 the conversation started again, because after 122 years of ministry in Elkhart, St. John’s had made the decision to cease their weekly services at the current location and find another church that could use their building. Richard Leib told an amazing story of generosity. St. John’s didn’t not want to see the property sold and used for retail. They wanted to see a thriving local church having an impact in the community. Consequently, on August 1st of 2011 the property was officially transferred to GCC.

Now approaching our 5th year at this location, to say we are grateful, seems a bit trite. Truly, words cannot express our deep gratitude for the diligence and frankly, Richard’s stubbornness to press through the negotiations to ensure that this all happened.

In a world where history is sometimes forgotten, the people of GCC-Elkhart often talk and remind each other of our responsibility to our neighborhood, our community and our world as we continue to invest ourselves in the work at the corner of Bristol and Bay. We remember that for generations before us, people lived generously to benefit those that would come after. We are the recipients of that generosity because of people like Richard and Lois that came before us and gave of their time, treasure and talents. So we commit to continue to be a place where families will thrive, where kids and adults alike will come to the knowledge that, Jesus is still the light of the world.

Today we have 2 services each Sunday. Attendance runs about 400, with over 100 of those being children from 0-5th grade. Every weekend they come and every weekend we say Welcome Home! And every weekend we are able to do so because Richard Leib carried a vision for a kind of spiritual rebirth for the church building he loved, in the city he loved and for that we will always be grateful.

Thank you my friend!